Hi everyone, today I’m going to write about scarab beetles! Today,  we climbed part of  Slieve Martin; it is part of the Mourne Mountain range and is beside Rostrevor, Co. Down.The mountain is made out of granite, developed 56 million years ago, 10 million years after the dinosaurs. There were a lot of volcanoes in the area and it took six  ice ages, scouring the earth, to reveal the Mourne Mountains!!  My dad is from Warrenpoint and it’s a beautiful part of the world! 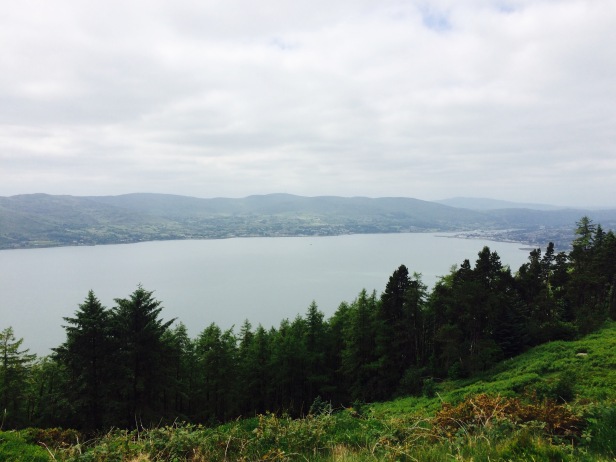 We were rambling away but always with eyes to the ground or the sky; on the look-out for insects and birds. It didn’t take long, and even though I was distracted by the meadow pipit song and swirling ravens, we  found in total 11  scarab (Scarabaeidae) beetles, they were everywhere! I decided I would find out a little bit more about them for today’s blogpost. 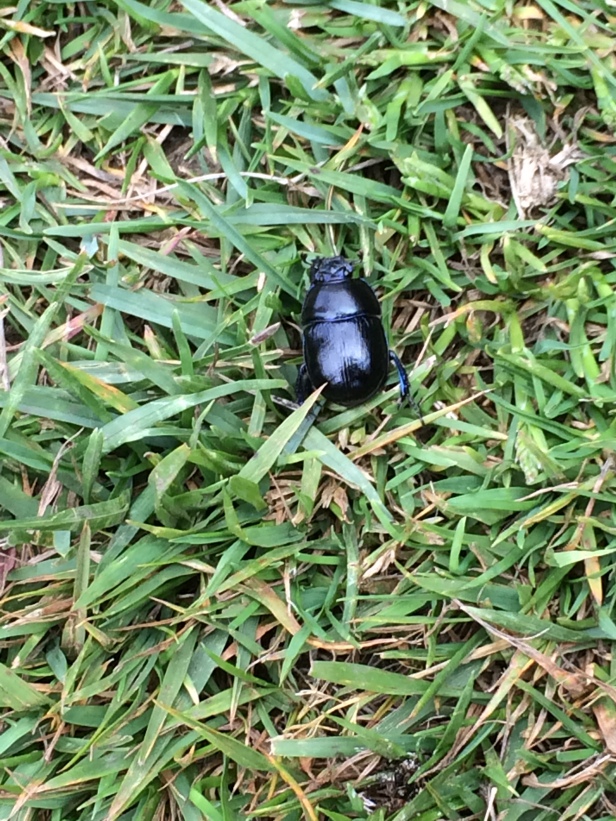 We found them near the Cloughmore(which means big stone in Irish) which overlooks the gorgeous Carlingford lough. Legend has it, that the stone was supposedly thrown there by Fionn Mac Cumhaill (pronounced Fin mac Cool) from the Cooley Mountains, which are on the other side of the lough.

Back to scarabs! There are 35,000 species of scarabs worldwide. Scarabs are the great recyclers of the world, they eat dung, carrion( dead animals) and dead, decomposing plants so, without scarabs we would be ankle deep in rotting waste. The larvae chew up the waste and poo it out as nitrogen rich fertiliser, this can be used by other plants and creatures. I think their shiny elytra are like little jewels and they were sparkling in the sunlight. We handled one in particular and it’s grip was tight, I was awed by its strength. We were all entranced by it. 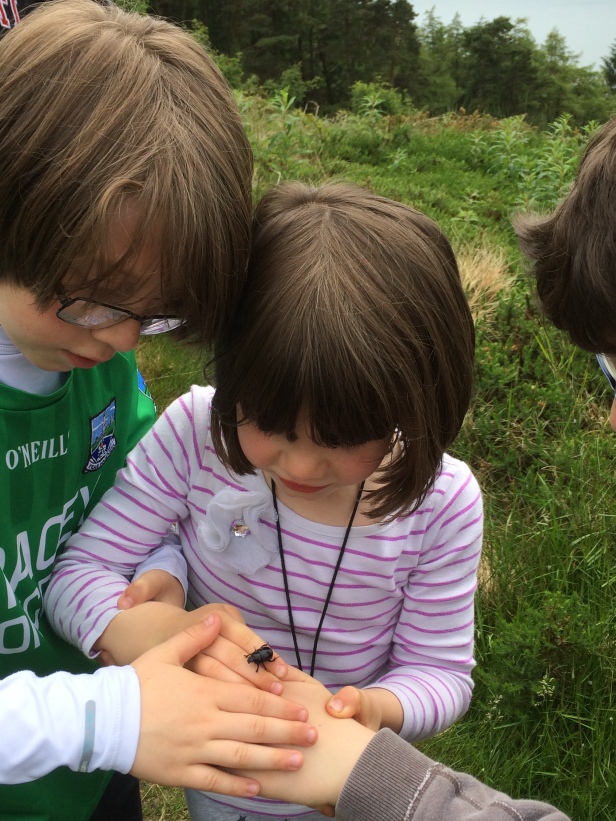 Scarab beetles are also very significant in Egyptian Mythology, they thought the scarab was a manifestation of ‘Kehepri’  the god who rolled the sun around the sky. They compared this with the scarab rolling a ball of dung and so the scarab became a symbol of rebirth. Even though it’s easy to guffaw at such reasoning, I just find it so interesting that invertebrates, such as beetles, were held in such high esteem. We, as humans today, seem to hold them in lower regard, this makes me feel quite sad. I was pretty chuffed as the beetle pooped in my hand! You might stop reading my blog now haha, but I hope you don’t! 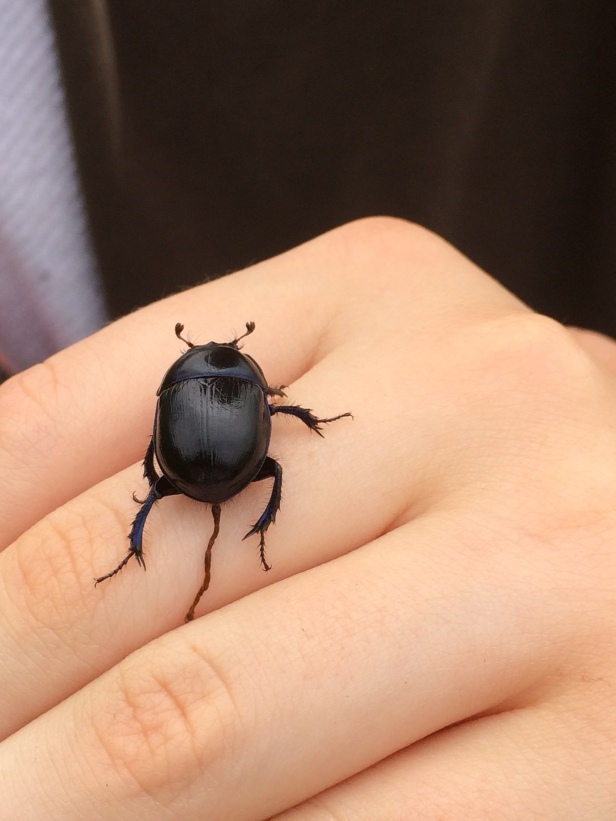 Another really cool thing about beetles, is that they can tell us so much about natural history. If you take a core (sample) from a bog and extract beetle shells (carapace), you can get thousands of years worth of information about climate change over time. Some beetles can only survive in certain temperatures, so their data can be added to other samples of pollen and tephra (volcanic dust) to get a picture of the rise and fall of temperatures. Wow! How cool is that??

There is so much to learn about beetles and I found out the particular scarab we found was a Geotrupes Stercorarius or Dor beetle. If you know more, please let me know!

Today, our walk was just lovely. I loved finding so many scarab beetles and then finding out more about them. I hope you liked reading about them too.

Thank you for all your kind comments so far, I really enjoy reading them. 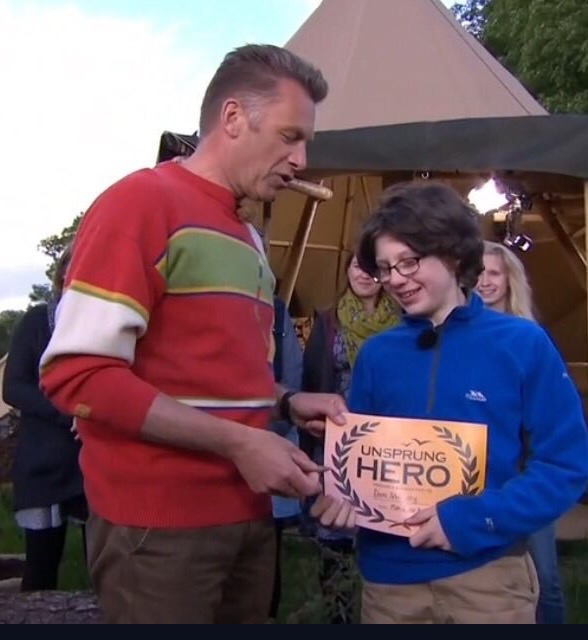 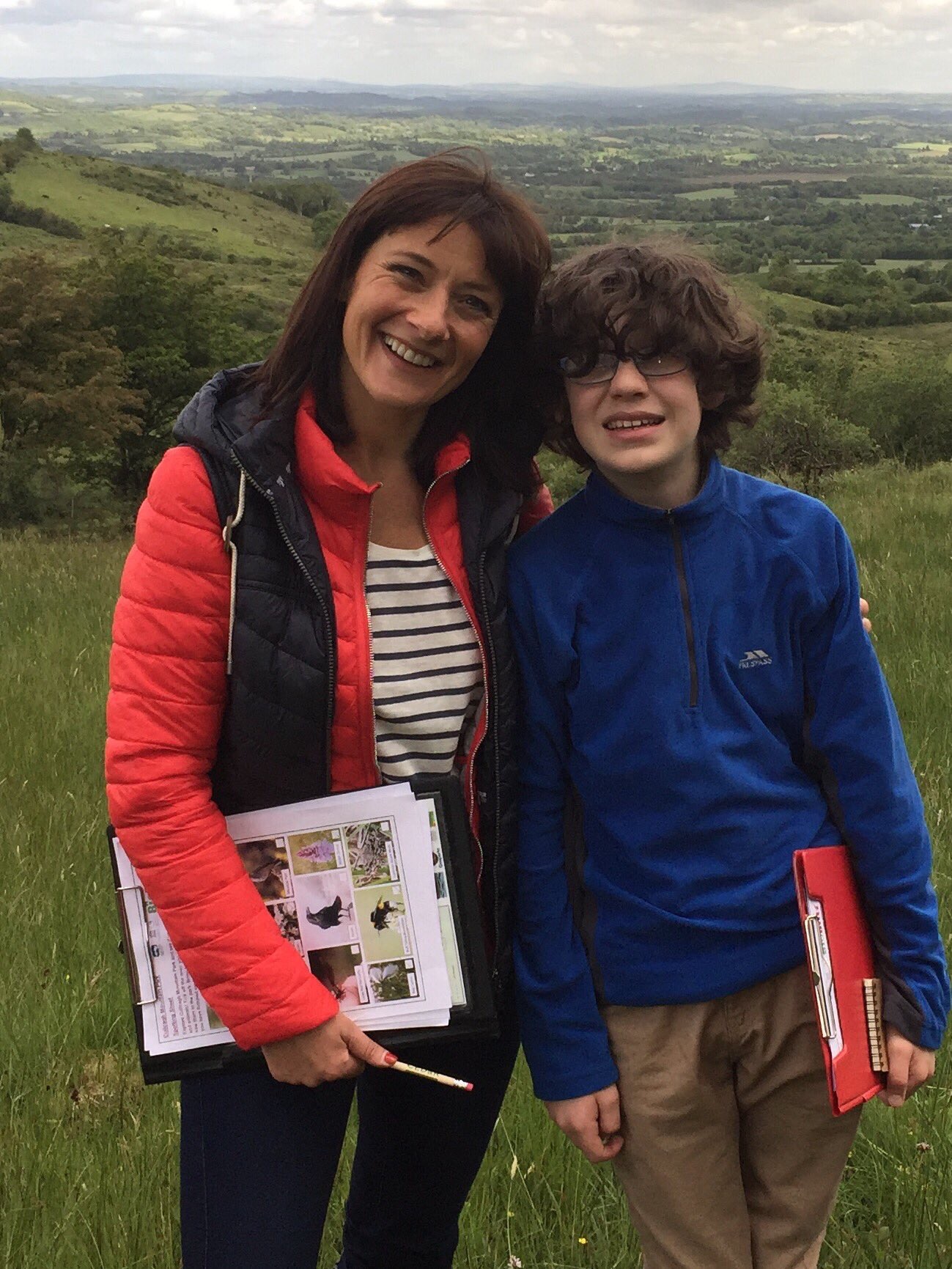 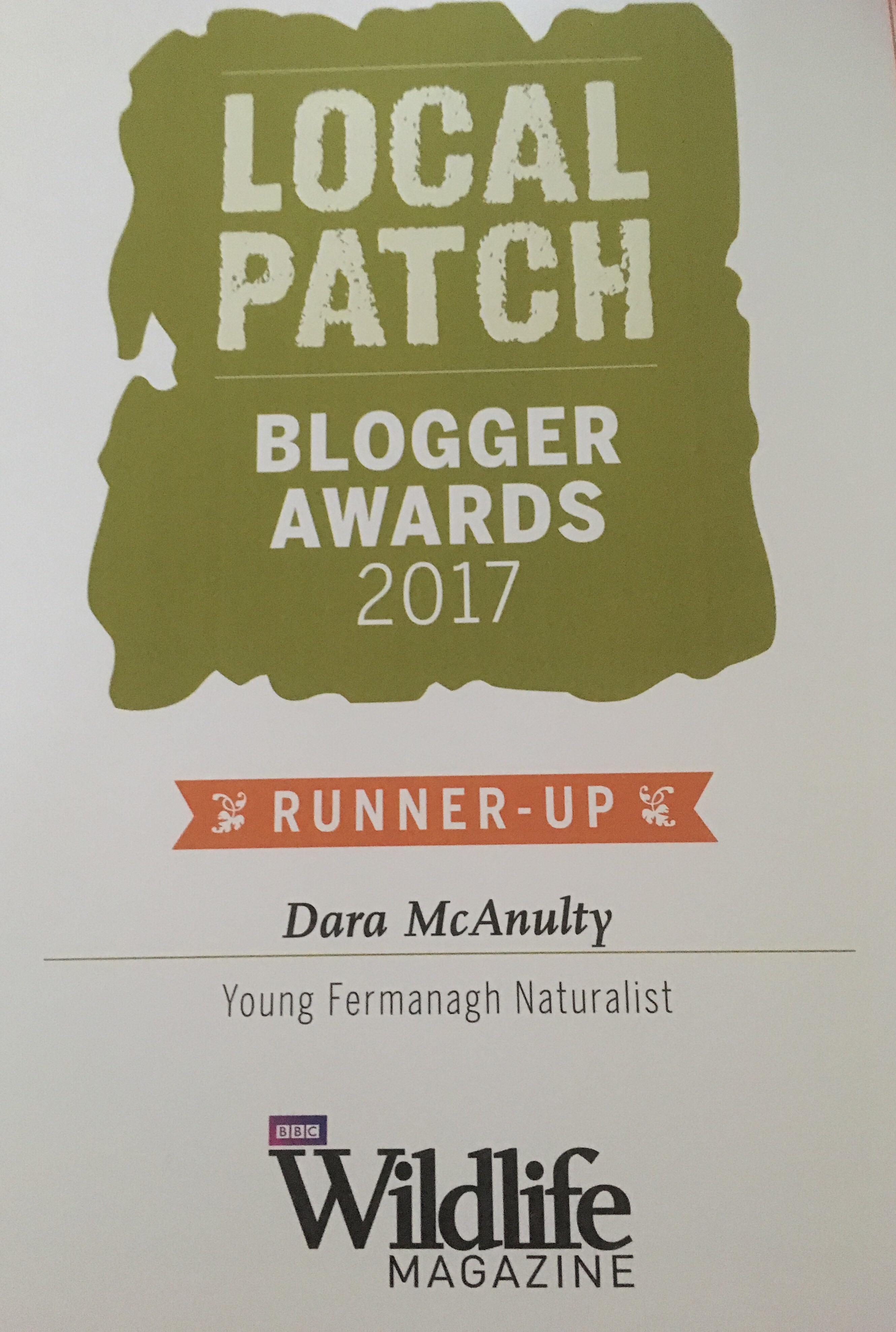 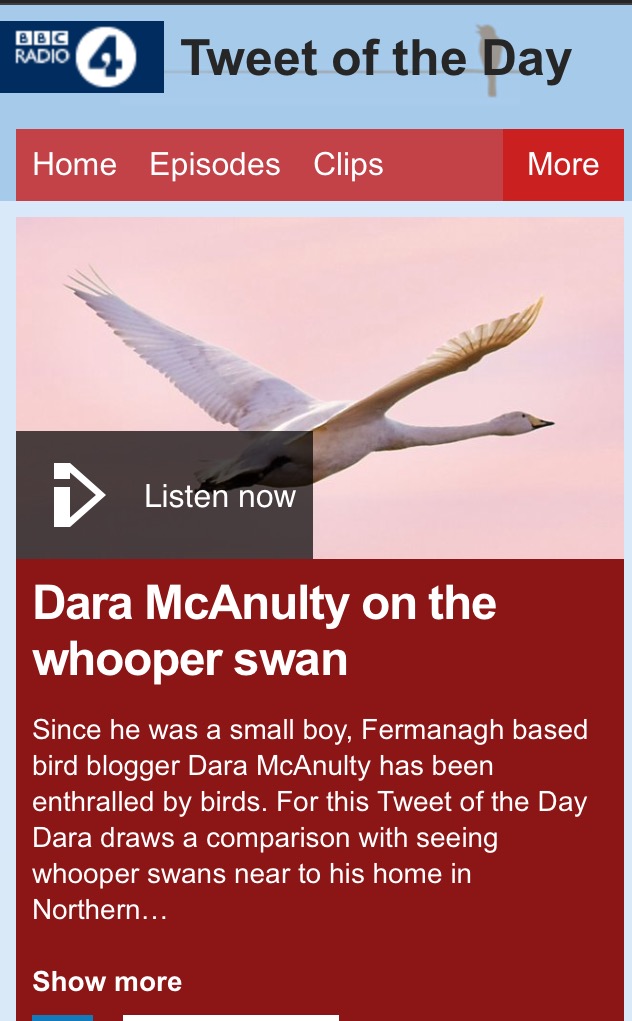 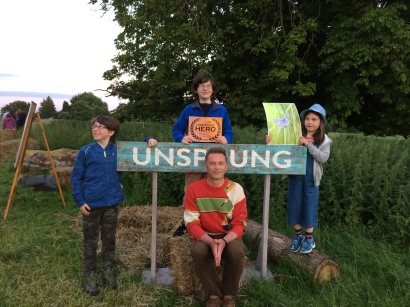 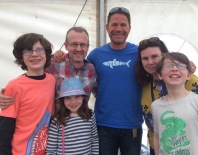 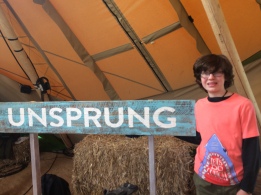 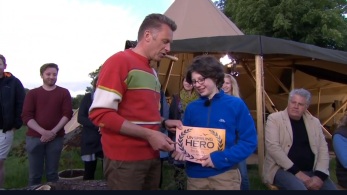